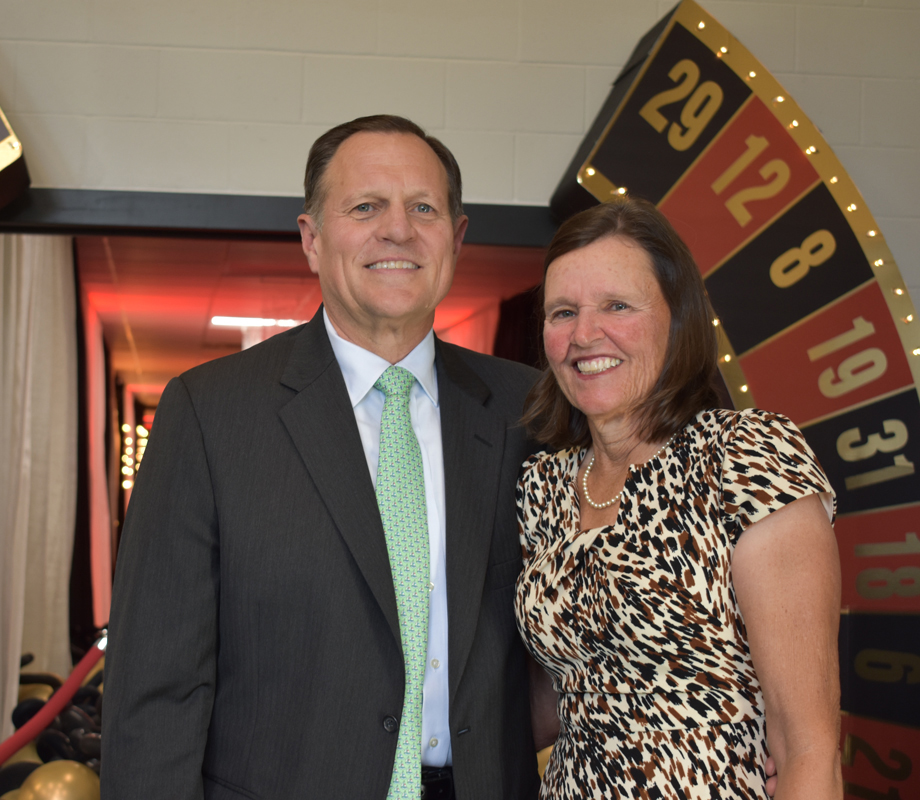 On Saturday, October 19, more than 720 Skutt Catholic supporters gathered to celebrate the school’s 26th annual Angel Flight fundraising dinner and auction. The special event honored Felicia Hutnick and John Kaiser. Over $480,000 was raised to support the more than 725 students attending the school this year.

The highlight of the event was the President’s Wish List request, which raised more than $120,000 for financial assistance and technology upgrades.

The celebration packed the school gym, commons and SkyHawk Student Center and honored two people who have lived the school’s motto and made a difference for current and future generations of students.

Felicia Hutnick and John Kaiser, have been part of the Skutt Catholic family since 2007, when their eldest daughter Alexis Kaiser ‘11 started her freshman year.
Felicia Hutnick is a former three-time NCAA Division I All-American tennis player and she went on to compete at Wimbledon, the U.S. Open, and Australian Open. With Felicia and John’s vision and leadership in design, Skutt Catholic added a state-of-the-art tennis facility on campus. Felicia also assisted Sheryl Vaughn in coaching the girl’s tennis team while their daughters were attending the school. She helped teach tennis to the physical education classes as well.

John Kaiser recently retired as the vice president of Union Pacific’s intermodal business unit, representing approximately $3.6 billion in annual revenue. He has a B.S. degree in mechanical engineering from Virginia Tech and a master’s degree in business administration from Stanford University. John served as the chair of the finance committee for the Skutt Catholic board of directors during his six-year term. In this role, he led the charge for many of the capital improvements and financial efficiencies seen in our school today.

Luck Be a SkyHawk Tonight Theme

With a theme of Angel Flight 2019 – Luck Be a SkyHawk Tonight, the school was converted into an elegant Las Vegas venue, complete with red carpet, lighted signs and 4-foot dice.

General chairs for the event were Mike and Joyce Bernard, Duane and Jane Fenner, Bruce and Karen Goracke, and Tim and Kari Kudron.