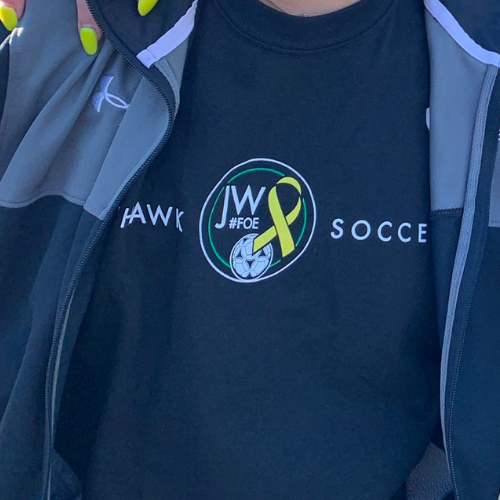 Cece Behrens ‘21, one of the girls soccer team’s senior captains, says this year is different for the #1 ranked team.

Jim Whitaker was the team’s volunteer assistant coach for four years before he passed away in early March from complications from cancer.

Head coach John Carlson says he asked Jim Whitaker to be an assistant coach when he was first diagnosed with cancer.

“I thought it might be a nice escape for him and I knew he was a good coach,” Carlson said. “Jim was a great assistant and passionate about the game and the players.”

Jim’s daughter, Brinlee ‘18, was a four year starter and won two state titles with the SkyHawks. Now, she plays at Iowa State. Jim’s daughter, Breena ‘22 is a junior and starting center back on the 12-1 team.

With the help of her sisters, Cece set out to find a way to honor Coach Whitaker and show support for his family as they go through their first soccer season without him on the sidelines. Tess Behrens ‘23 is a sophomore starter and alumna Chloe ‘18 won two gold medals and one silver as the SkyHawks’ goal keeper.

The players have added splashes of yellow and images of yellow ribbons to their uniforms in the form of shoelaces, hair ribbons, warm up shirts with his name across the back, and patches on their jerseys. The patches display Coach Whitaker’s initials, ‘JW’, and #FOE, representing the team’s motto this year which means Family Over Everything.

“Jim always wanted the best for all of us and he always encouraged us to be the very best, not only on the field, but in anything we do in life,” said Behrens.

Cheer on the #1 ranked girls soccer team as they play in the RCC tournament tomorrow night (April 27) at 5:30 p.m. at home.