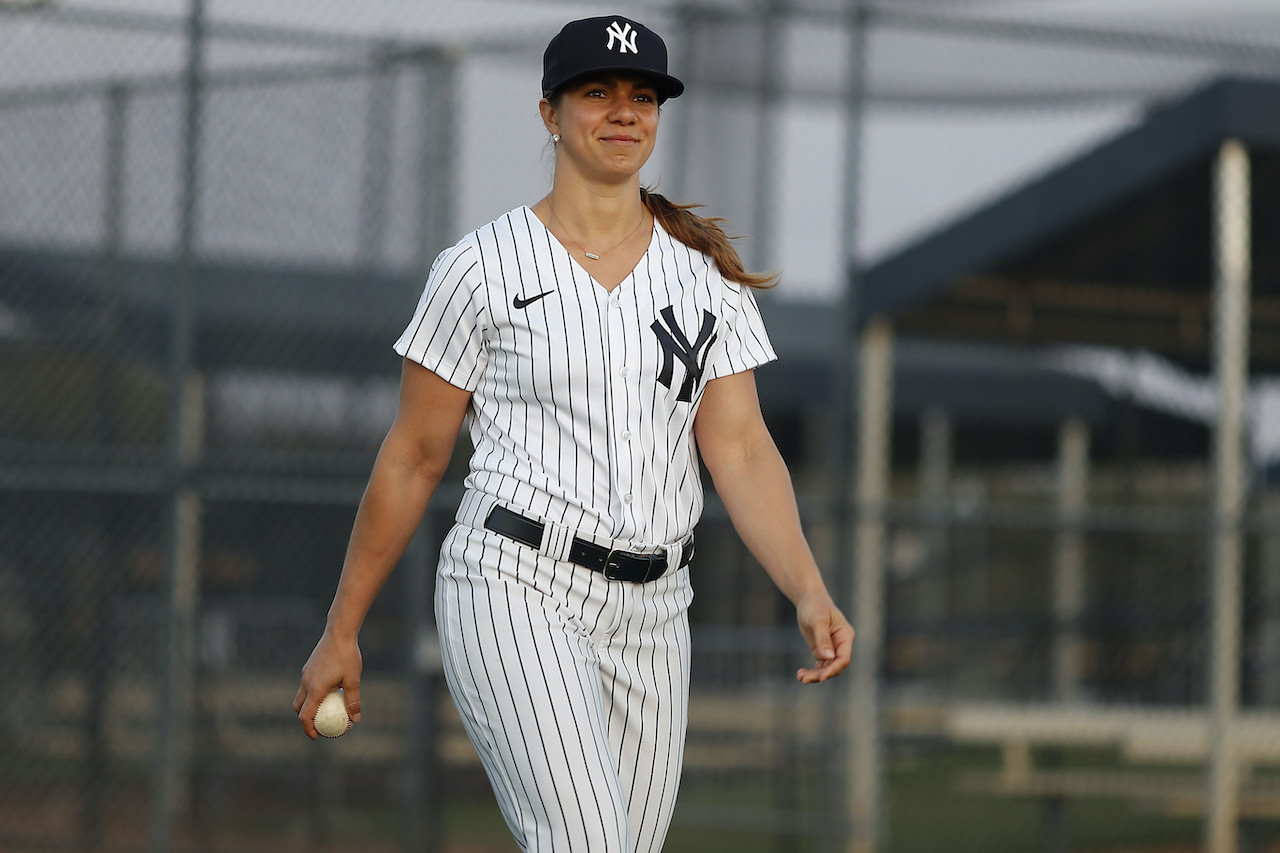 “The only way to show true gratitude is to find a way to pass on the opportunities that you’ve been given.”

Skutt Catholic president, Jeremy Moore, presented the award during the baccalaureate mass and senior award ceremony on July 17 at Christ the King Catholic Church. Rachel spoke to the graduating seniors about gratitude and challenging themselves to take risks.  She gave a special thanks to her parents and SC Coach Keith Engelkamp for the impact they have had on her life.

The 2019-2020 Outstanding Alumna Award Winner is Rachel Balkovec ‘05.  She has just entered her first year as a minor league hitting coach with the New York Yankees. Rachel is the first woman to hold that title in the history of professional baseball and is joining three other women that will be in uniform this season in various roles.

In 2005, Rachel Balkovec graduated from Skutt Catholic, where she was played softball and her interest in a career in sports was born.

“I was struggling on the field, but I knew that I could still contribute to the team in the weight room by bringing positivity and a good work ethic every day,” she said. “I excelled there and knew that I wanted to make it a profession.”

According to Rachel, the coaching she received from Coach Engelkamp and Coach King were paramount in shaping her ideas of what a coach should be like.

“I take some of their coaching styles in developing relationships with players into my own philosophy right now,” she said.

Rachel joined the Yankees after completing her second master’s degree in biomechanics and statistics in the Netherlands. While in Amsterdam, she served as an assistant hitting coach for the Netherlands national softball and baseball programs and went on to complete her research at the world-leading baseball performance research facility in Seattle, Driveline Baseball.

Previously, Rachel was in several roles with the Houston Astros’ strength and conditioning department.  She completed the 2018 season with their AA affiliate, Corpus Christi Hooks, and served as the Latin American Coordinator in her first two years with the organization.

The first time Rachel made history in professional baseball was in 2014 when she was hired as the first full-time female strength and conditioning coach in MLB in the role of Minor League Strength and Conditioning Coordinator for the St. Louis Cardinals. She also worked in apprenticeship roles for Louisiana State University, the Chicago White Sox, Arizona State University, Los Tigres Del Licey Beisbol, and EXOS early in her career.

The Omaha native is a former NCAA Division I softball catcher and has a special interest in organizational culture and behavioral psychology in relation to coaching. She has an undergraduate degree in exercise science and a master’s degree in sports administration from Louisianna State University.

Ultimately, Rachel says her goal is to be a general manager of a professional baseball team. She also wants to create schools for young women both domestically and globally centered around creating empowerment through sport and education.

“Being hired by the Yankees is wonderful and I’m proud of that and thankful for the opportunity,” she said. “But truly, I’m most happy that it will provide me more of an opportunity to empower young women and hopefully open up doors for those behind me.”

“I have that at the forefront of my mind each day and it truly drives a lot of my thoughts, words, and actions,” she continued. “The only way to show true gratitude is to find a way to pass on the opportunities that you’ve been given.”

According to Rachel having the opportunity to attend a school with service-minded values set her off in the right direction.

“My parents raised me like that and going to Skutt was another stop on my journey that was consistently showing me examples of contributing positively to your community and to the world,” she concluded.