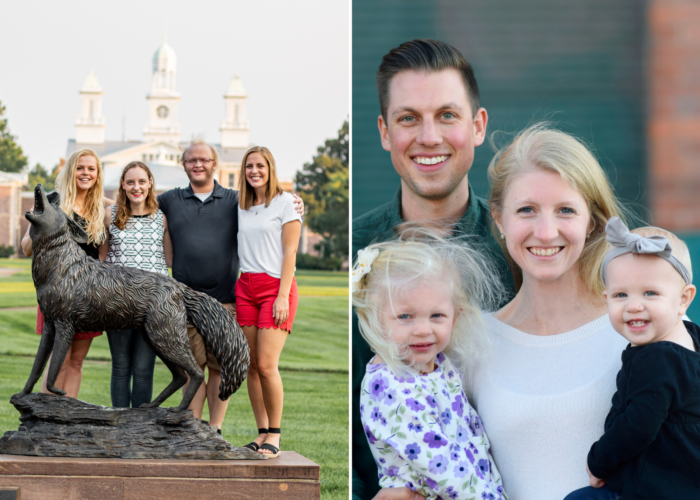 First semester, Skutt Catholic Campus Ministry had an an intern from the University of Nebraska-Omaha named Anna Holloway. She reached out to two alumni siblings with a shared interest in FOCUS Ministries.

“Make a Difference.” This is the motto of Skutt Catholic; it encourages students to make their lives a beacon of hope for others and be initiators of positive change in the world.

As Skutt Catholic students navigate their time through high school, the horizon of options broadens with many paths and career options. Many students will choose to attend a college or university, where they will be able to continue living out the values taught at Skutt Catholic as a student.

In these coming years students may wonder: how can I make a difference? What does it mean to initiate change?

To demonstrate what it means to “make a difference,” I caught up brother and sister, Samuel Wiegand ’17 and Hayley Wiegand Miller ‘11. Both are missionaries for FOCUS (Fellowship of Catholic University Students). As the name implies, this organization is devoted helping college students connect and experience deeper faith life.

Samuel, who graduated from University of Nebraska at Lincoln with a degree in political science, is now a FOCUS missionary at University of South Dakota in Vermillion, SD. He says his job is to “work with students, by building up Christ-centered relationships with them, walking together in discipleship, and eventually bringing even more people to know Jesus Christ.” Samuel compared Skutt Catholic and FOCUS saying both strive to give students an encounter with Christ and live out missionary discipleship.

Between receiving guidance from other missionaries and leaders in FOCUS and the sharing his time and care with the students, Samuel knows that serving as a FOCUS missionary is what he is called to do at present. He feels he is living out Skutt Catholic’s motto to the fullest saying, “That’s exactly what we are trying to do – make a difference and allow for change to happen in people’s lives.”

To conclude his interview, Samuel offered this advice for current students: “Don’t be afraid to step into leadership roles; you were made for greatness! Also, make sure to use the chapel at school; it’s truly a blessing to be able to know our creator is literally just waiting for you to come visit Him!”

Sam first discovered FOCUS through his sister, Hayley Miller. After she graduated from Skutt Catholic, she went to UNL where she encountered FOCUS missionaries and became very involved with them in student leadership. After obtaining her degree in elementary and special education, Hayley became a FOCUS missionary in Pittsburgh, PA at Carnegie Mellon University. She served as an on campus missionary there for two years before transferring to UNL and serving there for three years. She now lives in Cheney, WA with her husband where she serves as an affiliate missionary at Eastern Washington University.

Hayley feels she is truly making a difference through her work. She says, “I think about this almost daily – my hopes and dreams within serving as a missionary are that I am making a difference in the lives of college students. These are incredible, lifelong differences too – choosing Jesus and His Church as the center of their lives will set these men and women up for a life of loving the Lord, being strong in the faith and morals, leading their families to Heaven, and hopefully fostering lifelong desires to evangelize in all areas of their lives!”

Hayley says her experience at Skutt Catholic prepared her to live out her missionary calling. “I was challenged and led by the incredible staff and faculty [at Skutt],” she explained, “I learned not to settle for mediocrity but to put everything I had into all I did, which is a choice I still make now.”

She went on to describe how her standards were formed at Skutt, and she was taught how to make hard decisions. The advice she has for current Skutt Catholic students is: “Read the bible every day; this Is the one place we can concretely rest in truth and be filled with peace that lasts!”