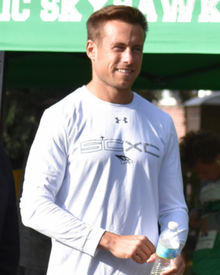 The Skutt Catholic cross country teams are about to embark on the toughest part of their season — the State Meet this Friday. We checked in with head coach Steve Carroll ‘05, who was named the Coach of the Year for Nebraska Boys Cross Country* last spring, to hear about his personal journey and his recipe for success.

“My mom had me play everything growing up, which was great,” he said. “She was a great influence and an awesome coach at home.”

He was an outfielder and pitcher in baseball and a forward in basketball throughout grade school and middle school. Steve also played a bit of football and did some swimming. But, being a runner did not come naturally at first.

“In third grade I struggled in my first PE class mile run in Mr. Gazda’s class,” he said. “That was a turning point for me. I ran 10:50 and was devastated.” We also tested out on many other areas of fitness which I felt I had failed.

“I made some changes over those years so I would never feel that miserable again, which improved all of my other marks and athletics as well,” he continued.

While at Skutt Catholic, that attitude served him well as he went on to become a state champion in the 800m and the 3200m relay, and continues to hold the school record in 400m, 800m, and 3200m relay, for now. Steve was also a district champion and a member of the state runner up cross country team in his lone year of competition in 2001.

Success on the track and the cross country course at Skutt Catholic translated into a short but successful running career on the Wayne State College track and field team. Steve says his favorite college memory was after a three year absence he came back to win the 800m at the Howard Wood Relays in Sioux Falls under the lights his senior year.

Once he was done competing in college, Coach Carroll said his love for athletics never went away. He was playing and getting asked to sub in different leagues five nights a week.

“The impact my coaches had throughout my life was something I felt like I could give back to others as well,” he said.

While working full-time at TD Ameritrade, his first coaching job was right after college when President Jeremy Moore asked him to help coach track in the spring of 2010. Coach Turman asked him to return to coach track in 2016. In 2018, he was named the head track and cross country coach. He is currently completing his fourth year leading both. In 2019, he joined Skutt Catholic full-time as the director of alumni relations.

The Skutt Catholic Boys Cross Country team won their fourth consecutive state title last fall, with two individual state champions during that time. This year the boys will be going for a fifth straight title which would set a boys state record for consecutive team titles in any class. On the girls side, there has been one individual runner up and two runner-up team finishes during his during his time on the cross country coaching staff.

More than anything Coach Carroll stresses the importance of every member on the team.

“In cross country and track there are many talent and ability levels,” he said. “It takes the support of the entire roster for everyone to reach their full potential and be successful as a team.”

Coach Carroll says he tells his athletes, time is precious, show up on time; work hard; bring a positive attitude; and encourage their teammates.

“I coach them to practice the way they want to compete,” he continued. “Focus on the little things because those are the elements that add up to the big picture.”

For Coach Carroll, working with and inspiring student-athletes is a natural calling and a role he finds very rewarding.

“I love seeing the year-to-year progression and coaching an athlete to reach their full potential,” Coach Carroll said. “It’s so rewarding to show them that they are capable of more than they ever thought possible.”

*Coach Carroll was named U.S. Track & Field and Cross Country Coaches Association 2020 Coach of the Year in boys’ cross country in the state of Nebraska.